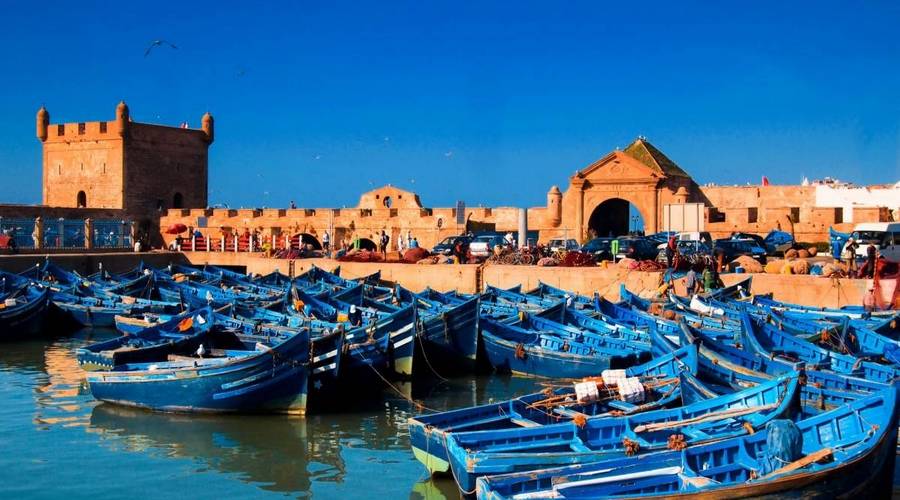 Essaouira is located about two hours south of Marrakech, along the windy coastline of Atlantic Ocean. The city is known by the name Swerah inside Morocco or by its old Portuguese name, Magador.

The city combines a beautiful seaside with its exciting beaches and old medinas to give an unusual mix of classic Moroccan tradition and vibrant vacationing destination. Beside its great tourist places, the city offers lip-smacking food.

Essaouira has a history of colonization which has its traces marked on the monuments and buildings constructed by the Portuguese. One such example is the construction of the massive stone walls, which still envelope the old medina of the city.

Game of Thrones fans will recognize Swerah as the backdrop from the place Daenerys Targaryen bought her army of Unsullied soldiers.

The long beaches and calm harbor are relaxing holiday destinations where you can enjoy the warmth of the sun and many water activities. Windsurfers can be seen gliding over the waves and fishing boats pulling into the harbor. It is a refreshing retreat away from the heat of the Sahara Desert.

In 2013, the television show Voyages enlisted Essaouira in its list of Ten Happiest Destinations on Earth.

The city boasts of rich history, culture, beautiful beaches, water sports, and monuments. There is a lot you can explore in the city or spend the day vacationing on a warm, cozy spot. Its vibrant and fun ambience is prevalent wherever you tour inside the town, making a perfect destination for couples, family, and a group of friends.

Music and Art of Essaouira

The city is famous for its zest for music and art. Jimi Hendrix is known to have stayed in the city temporarily while the rumor has it that he wrote his popular song “Castles Made of Sand” when he was in Essaouira. In fact, the singer never travelled to the city until 1969 while the album was released two years prior to that in 1967. This means the rumors are nothing but that. However, the city saw the fusion of local gnawa with blues and rock music in 60s creating incredible music unheard anywhere else in the world.

If you visit the city in the end of June, you will be able to participate in the Gnaoua Festival of World Music which is held in Essaouira every year.

Go Kitesurfing in the Wind Capital of Morocco

In Essaouira, the wind can be gusting all time of the year because of its geographical conditions. It is a fantastic place to go kite flying and kitesurfing. If you are drawn to the oceanside of the city, then you can also go for windsurfing or kiteboarding. You can enroll in the ION Club to learn any of the water sports including kitesurfing from the professionals. Every day of the year is a perfect weather day to go surfing on the beaches of Essaouira city, however, the high season runs from April to the end of September.

If you love the ocean or want to try sailing in a cruise, the city port offers tours that start early from 10:30 in the morning to 2:30 in the afternoon. It is recommended that you book your cruise a day before to make sure you don’t have to rush. These tours depend on weather conditions. There are sunset cruise tours as well. Tea and Moroccan pastries are served in all cruises.

Enjoy a Day at the Port

Most travelers visit Essaouira for its scenic oceanic beauty and picturesque shoreline. This anchorage of the Moroccan coast is a rejuvenating summer destination. In its atmospheric port, you will see flurry of traditional blue boats with their huge fishing nets arriving and departing amid the noisy hustle and bustle of the boatbuilders. Fishes from this port are supplied to the entire Moroccan coast and even as far away as France.

Skala du Port and Ramparts of the City

A little farther from the beach are the ruins that make fascinating tourist destination for someone who would love to dig into the history of the city, its ancient architecture, and its old culture. You can walk or take a camel or horse ride to explore the ruins.

The fortifying walls are lined with old, non-functioning cannons. Taking a stroll on the cobbled stone of these ramparts during the sunset, while listening to the waves of the ocean crash against the walls is a pleasant experience. The best viewpoint is to the north, so make sure you bring cameras with you. You will recognize the ramparts from the opening scene of Orson Welles’ Othello filmed in 1951.

Down by the harbor is the bastion stands tall overlooking the fishing port and the Île de Mogador. It offers a beautiful sight of the fortified medina through the view of swirling seagulls. The picturesque view can be found on nearly all official literature of the country.

A little off the coast to the southwest is Île de Mogador. The place is a clutter of small of islets that are famously called Îles Purpuraires (Purple Isles) of antiquity. The place is full of old and fascinating structures you can spend hours exploring. These islands are uninhabited except a sanctuary for Eleonora's falcons.

Fortified inside the ramparts, the medina of Essaouira dates to the 18th century and was added to the list of UNESCO’s World Heritage sites in the year 2001. A rather well-preserved example of the country’s military architecture in North Africa. The medina is full of noise and excitement every day. The narrow streets and souks are filled with vendors, leafy plazas, and wooden doors of whitewashed houses. The place is a wonderful place to take a leisurely stroll and buy souvenirs.

This 18th century mosque is another popular landmark in the city. The library in the mosque contains some of the manuscripts that are donated by Sultan Sidi Mohammed Ben Abdallah, after whom the mosque takes its name. Unfortunately, visitors are not allowed inside the library.