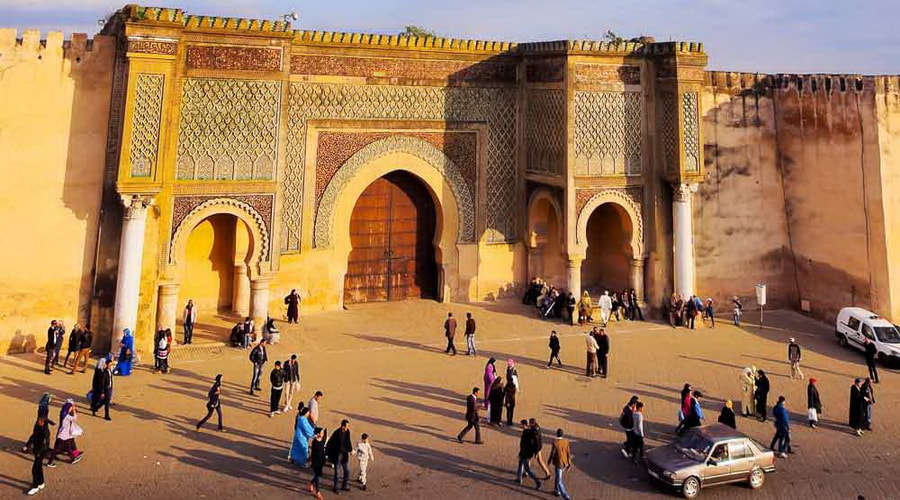 It is an interesting mix of Jewish, Moroccan and Andalusian cultures which shows evidently in the buildings and cuisine of the city. Although, Fes lost its commercial significance in 19th century, it remains a self-confident city whose cultural lineage continues to incite interest in tourists around the world.

There are numerous tourist attractions in the city of Fes. If you are time-bound and wish to take the tour of the most imminent locations around the city, here is a list that you could follow.

The Golden Gates of Royal Palace

Although, the palace is not open for the visitors, you can savor the sight of its seven gates completed plated in gold. This iconic spot makes for a spectacular backdrop to click photographs. The colorful walls with intricate details is an example of beautiful Moroccan architecture and is definitely worth a visit.

This university is the oldest existing educational institution and is recognized by the Guinness World Records as well. The architecture of its building has kaleidoscopic patterns that are beguiling to say the least. The walls are decorated with stunning tile work. The university was founded by Fatima al-Fihri, a woman who fled Tunisia for Morocco.

Residing about this university are two other madrasas or Islamic colleges – Madrasa al-Attarine and Bou Inania Madrasa. You can make a stop in these madrasas to admire their intricate carvings on the wall and architectural design.

Bou Inania Madrasa is the city’s best theological college that was built between 1351 and 1357 by Merenid sultan Bou Inan. The college has been refurbished with elaborate mosaic tilework (zellij) and cedar lattice screen (mashrabiyyas). Contrary to a simple prayer hall, this college hosts a complete mosque.

Contrary to other madrasas, Madrasa al-Attarine is open to non-Muslims. It is defined by its decorated tiles, stucco and wood work, this Islamic college is nearly 1,000 years old. The college is opened every day of the week except for Fridays. In the presence of a guard, the visitors can take permission to go upstairs and visit the student quarters.

Merenid Tombs Up the Hill

At a farther end from the decorative details of madrasas lie the Merenid tombs. These sepulchers are situated high on the hill above Fes. These giant tombs have interesting and mysterious theories surrounding them. It is believed that these tombs hold official documents, however there are no evidences backing up the theory. The tombs date back to the reign of Merenid dynasty that ruled Morocco from 13th to 15th centuries. These crumbling remnants of that era still retain some carvings.

The view from the hill before and during sunset is simply spectacular. Tourists are drawn to the site for its panoramic view of the city and its countryside. The quiet atmosphere is stirred only by the call to prayer that surrounds the city with the help of speakers.

A City of Festivities

If you visit the city in October, you will witness one of the most celebrated festivals there – The Tissa Horse Festival. Organized in the Tissa market, one hour away from Fes, this festival enlivens the otherwise quiet market town. There is loud music, dancing, Moroccan food, decorated tents, and mint tea abound.

The main event and the most fun event in the whole festival involves riders in colorful garb showing off their equestrian skills and the quality of their purebred Arab and barb stallions.

Situated in the “Mecca of the West” is Zaouia Moulay Idriss II. It is one of the medina’s most popular holy shrines which is dedicated to the founder of the city and ruler of Morocco. The shrine was completed in the early 19th century and is one of the most well-preserved historic buildings in the city. Its design is an example of the finest architecture from Moulay Idriss’s lifetime. Visiting the shrine is believed to bring good luck to the women by helping their fertility.

The non-Muslims can take a glimpse at the beautiful interior of the shrine and tomb from the entrance.

Fes, Athens of Africa, is almost everybody’s dream. Its gardens, cemeteries, and old city walls add a mythical feel to the city that will only encourage you discover more about it. It is said that even the local guides get lost in the streets of Fes and the deeper you go the more you discover about the culture, history and tradition of Morocco. May be that is why the city is widely known as the “Soul of Morocco”.